One of the reasons I thought I’d start a blog again is that I have recently finished writing/editing a book.

Library Analytics and Metrics: Using data to drive decisions and services was published in April 2015 by Facet and is the first book I have been involved in editing entirely myself. 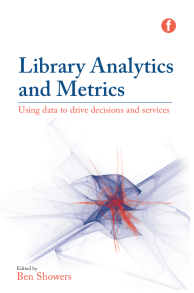 After having spent over a year writing large portions of it, and corralling the contributors, I miss the (almost) daily task of writing, editing and re-writing.

It’s a fairly arduous task editing a book. And I was lucky that my contributors were uniformly excellent, and far better at keeping to deadlines than I was.

And, it’s fair to say I miss the habit of writing. I wrote a fair bit of the book, including introductions to each section and one of the case studies. But that doesn’t mean I’d necessarily jump at the chance of doing it all again.

Someone at my current place of work found out about the book and after discussing it for a bit asked the obvious question: Would you do it again?

Would I? Would I spend that amount of time and effort (physical and mental) doing it all again? You certainly don’t do it for the money – there isn’t any. It’s exciting to begin with but soon loses its veneer of novelty.

Like a relationship, the initial giddy excitement settles down into something more serious: A commitment. And commitments take effort and attention. It takes work, day-in and day-out. I also have a family, so it’s also an impact on them, and my ability to spend time with them.

So, would I do it again? No, probably not.

Of course, if I get another chance, I may change my mind! If someone else gets the chance, I’d probably tell them to do it too. But it’s always helpful to know a bit more about what you’re getting yourself into.